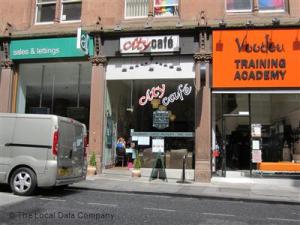 City Cafe is one of those establishments that you walk past time and time again with people nipping in and out with shifty take away packages like they’ve just got a fix of crack. The Toasters love crack. It was an odd choice for a venue, but one that was championed profusely by The Prince, who unfortunately missed it. The venue itself is pretty small, not really designed for big groups, so what happened when 12 bits of dry crumpet turned up? Not a problem….

FTP – “I have to admit to having some doubts about city cafe as a classic toast venue but I was pleasantly surprised. It may have been because “Lord Rothmere” was in attendance,complete in tux, but the staff were attentive, friendly and accommodating. Swaps were no problem at all. The ad hoc seating arrangements of 3 differing sized tables pushed together worked surprisingly well. The semi circular result allowed for conversations and banter to involve everyone rather than there being several conversations at once. This made it one of the most social and banterific toasts I have been too. However we are a breakfast club and our scores should be based on the food rather than the craic. I, like everyone else, had the full English. It was keenly priced but my personal opinion is beans, black pudding, and hash browns should be seen as core items rather than optional extras. The home made home toast was superb and the hash browns, black pudding, tomato, and bacon good. However the egg and sausage were disappointing. My egg was overlooked the yolk was solid rather than runny while the sausages appeared undercooked. Overall I would say a can do better 6.5“

Grill Scoff Herrings – “Having been out of the game for a couple of months I was more than ready to take on a Toast outing. With a hang over rating on the upper end scale, I nearly cried off, but with a bit of motivation that can only be garnered by ones decision to don a tuxedo, I made it to the table. City Cafe is an unabashed greasy spoon and I like it. Friendly staff and decent prices. Coffee was not bad, not great either, but no complaints. Breakfast itself came in good time and a slight oversight by myself meant that additional black pudding and a ramekin of beans came a little later, however with no fuss.  Bantastic table discussions all round, easily one of the best Toasts for me in terms of bon homie quals, especially when FTP revealed my secret identity as the owner of the Daily Mail and above mentioned waitress believed it. Discussions of Gazza, 9/11, Naked Jungle and Bouncer were magnif but a paltry second to Seaburger’s story of the drunk Russian. The experience was let down massively by one product. The sausages at City Cafe are a disgrace to breakfasts. They must have surely been purchased from the bottom of the supplier catalogue and left all who ate them with dicky tummys, bad tastes and sad faces. What a shame. If we were rating bants this would be off the charts but as Toast is all about the brekbrek my rating is:  4/10 – Top Japes, Bottom Sausages”

“Now THAT was an immense Toast, whether it was the fact we were huddled around the small table or just the onslaught of laughter the food was barely not even mentioned however one item stood out. Bargain Brekkie with 2 Cappuccinos (deece), 2 sausages, 2 bacon, 2 Toast, nice fried egg, a surprisingly tasty hash brown and a decent black pud all coming in at under a tenner BUT THOSE SAUSAGES. With one Toaster having sent them back for being cold, I can’t imagine being hotter would improve the taste. Great service and very accommodating to our needs the venue itself was great and the fact we were in there for 2 hours with no qualms and just a jumbo jet of relentless funnies made the whole thing seem like my version of Bouncers dream in Neighbours – APART FROM THE SAUSAGES. Made up there were no mushrooms for anyone. The overall breakfast was pretty good, but they need to make their sausages more like bossages. 6/10“

Seaburger – “I should really do these reviews immediately as I’ve forgotten most of what went down. One thing I haven’t forgotten though is eating anaemic sausages whilst talking about Keith Chegwin’s penis. Pretty standard breakfast, best toast banter in a while, horrific sausages. Most of the score is down to Grill Scoff Herrings’ tux… 6/10“

Final Thoughts – If ever there was a case of being dragged down by one breakfast item this was it! Wholesale slating of the sausages causing massive drops in marks. The venue had the lot, other items on the table were great and the service was immense – City Cafe should learn how to play ‘Hide The Sausage’. 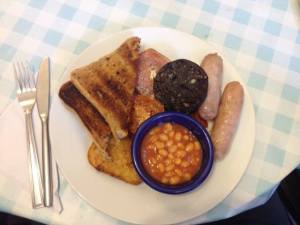 Category : Only good for charcoal.