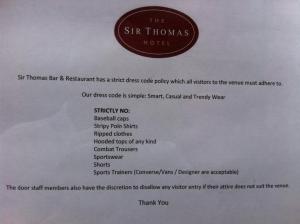 The Sir Thomas Hotel was to be the choice venue for a Birthday celebration of a namesake Toaster, for the price it could have been a guaranteed bargain. Usually a place we would well avoid the sandwich board advertising the deal was enough to get a healthy 13 rock up for this Toast. Unlucky for some. I don’t know. And I don’t care. Stop wishing bad luck on people, it’s breakfast you bastards.

Grill Scoff Herring – “One unmovable mainstay of the Toast meetings is a wide range of premium, platinum standard japery. Saturday did not disappoint in this field and furthered discussions of exporting our fresh approach to solid reliable bon homé on an annual basis brought exciting prospects to the table. That and a healthy turn out of 13 for Jungle Trouble ‘s birthday meant scores of 10.0 all round in the bants dept. With regards to my brekbrek however, the only thing that was premium was the eternal supply of toast & drinks. The price of the Sir Thomas Hotel breakfast really is something to shout about. At £5.95 including said perpetual accompaniments I’d recommend STH to traveling paupers and mingebags alike. For me though, everything was just too…hotelly. The ingredients were nice, I liked the spicy kick to the grilled tomato, the egg was on point and the pork products had no nasty surprises. It just wasn’t special, there was no exciting aspects to it, there actually wasn’t really enough of it either. I’m saying all of this with that marvellous price in mind but certain things stick out to me: 1. No Black Pudding. 2. No leniency on the replacement test. 3. Standard Birds Eye hash brown.

This left me somewhat cold, so my summary really is that I did enjoy my STH breakfast, but I won’t be rushing back when even cheaper options such as Shiraz lie only feet away.

Mr Kirk Douglas – “As Toasts go, this one was epic as always. The STH was more than ready for the crew of whoppers and food came out all together even with the last minute addition of a veggie one that could have made everything go ooops sunny siiiide your head, but it was no problem.

The value was fantastic especially for what you got in terms of Toast/Juice/Coffee, however the quality of the ingredients were around that value. Nothing ‘great’ but everything good, apart from the hash brown, which was cack. Portions weren’t huge, but that was a relief really as we got to fill up on free stuff, which of course felt better.

Decent Toast, probably wouldn’t recommend it to someone, but good for a big group.

Clarence Boddicker – “I have finally come round enough from “booze fest” to write my review for the Sir Thomas Hotel.
This really was a breakfast of two halves. I expected a lot from Sir Toms having eaten there on a few occasions and never been disappointed. The service and surroundings are always top notch and this time was no different, I knew before hand that it was a hotel and hotel breakfasts are usually cack and this time was also no different. The build up was faultless, coffee, tea, orange juice, toast and jam on tap and free flowing. Then the breakfast…. You know when you are doing really well on a computer game then you die…. That’s how I felt when my breakky arrived, gutted. I probably got my monies worth in toast and juice alone at £5.95 but I won’t be in a hurry to return for breakky. Clawed some kudos back for dealing with our numbers, ( I doubt many places in town could deal with so many so effortlessly)
50p more I could of gone the Clove Hitch 😦

Minute Man – “With 13 eager toasters turning out to celebrate Jungle Trouble ‘s EP launch, this was possibly the busiest Toast yet… but sadly not the best. The group was in good spirits but the Sir Thomas Hotel staff had what i’d characterise (harshly) as a cavalier attitude to customer service. No menus given, no options discussed, no possibility of substituting items. A bit of a like it or lump it approach… but when the price is low, it’s hard to complain too much. The continuous supply of toast, OJ and hot drinks was a big plus but the breakie itself was mediocre. Reasonable sausages and bacon, a decent mushroom but soggy hash browns, watery beans and an underwhelming fried egg. If you’re looking for a basic breakfast with a plentiful supply of drinks, then it’s a good option, but like the building itself – the Sir Thomas Hotel breakfast promises much on the face of it, but is a bit of a let down when you get into it.

AB FAB – “I don’t really have the right to complain. I had not rsvpeed nor turned up anywhere near in time. The fact that they plucked the veggie brekkie out of thin air was pretty remarkable. However, what they plucked out of the air, wasn’t, sadly. Not that it was bad, it was just very, very standard. And not a great deal of standard fare at that. Tomato and a mushroom instead of sausage and bacon. hmmm, not quite the veggie sausage/onion ring/hallumi/extra hash browns I’m used to. The fact that I was late (no fault to STH obviously) tragically made me miss the big seller: coffee, OJ and toast on tap. I arrived in time for a cup of coffee and a piece of toast with no butter.

But despite my hangover and only being half awake, it was very pleasant round the table, great conversations, and at £5.95 I really shouldn’t complain, just arrive on time. 5/10“

Jester Fortune – “Possibly the biggest Toast yet. The Sir Thomas didn’t fail us but nor did she excite us. The food was of a decent standard but lacking on portion size but bacon, beans and sausage of a decent standard, few moans about the hash browns but I don’t recall any issue. No swapsies allowed and I’ve a feeling this was to do with the group size. Tea, coffee, OJ and toast are unlimited and at £5.95 good value. Service was amazing, 14 or so breakfasts all brought out within a few minutes of each other. I’ll give it a 7 with bonus points for service and price.
The whole day was a 10 and I’m still paying for it now. 7/10“

Final thoughts – Although the value was good, there is always something extra needed for a successful Toast and the Sir Thomas was simply too ‘okay’. ARISE SIR THOMAS THE AVERAGE!

Category : Only good for charcoal.