After a few weeks of disappointing dips and sloppy service, the Baltic Social was the next venue of choice. Whilst mostly known for it’s music and variety of lagers, the food has started getting attention of it’s own. So it’s off to the Baltic Quarter for the second time this year. 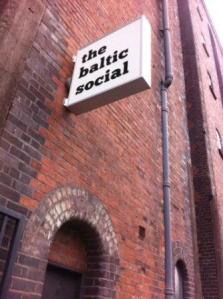 “After a missed month or 2 I was pleased as punch to rejoin the fold for an FE and a slice of Bants.
I took it upon myself to Tux up in a bid to up the (b)ante for our 30th gathering. Sadly, I discovered I was to be flying solo, whilst some of our number had suited up I couldn’t help feeling some of my fellow brethren could have moved up from the standard issue checked shirt. However, with 2 of our most likely to scrub up well unable to attend, 1 due to some obscure form of train sickness, I ploughed on and enjoy my status as dapper gent.
My first chance to eat at the Baltic Social and I have to say I was not disappointed. After a round of slightly chaotic drinks, all of which looked good, it was on to the main attraction.
Firstly, an excellent performance by the chefs who delivered almost all the breakfasts in one steady stream with multiple variations. I’ve yet to join the halloumi gang but there was much positive munching and I have to say I may give it a try next time.
The quality of the ingredients was obvious, 2 pork sausages, good bacon and a special mention for the homemade Hashie which was delicious in flavour and texture. I was disappointed with the size of my fried egg but the yoke my suitably runny so a minor detail. I know some will discuss the issue of bean juice and I shan’t get involved in the accusation of illegal egg dipping but I was very happy with my plateful, and the mountains of communal toast.
The banter flowed and Luther Two-Tache‘s choreographed exit to a pre-arranged soundtrack sealed the deal for me, a stellar performance all round.
8.5/10“

“One of the themes that came out of the comments from our “fans” following the reviews of Liverpool marina/boat club that we were somehow unreasonable to expect pleasant service and a decent breakfast given our numbers. Baltic social offered the perfect repose to this. Coping with a similar number of toasters they hosted one of if not the best toasts.
The service was superb. At times it must have felt that like there was a conveyer belt of drinks in operation but they were provided promptly and to my knowledge without any errors.
When it came to ordering swaps and additions caused no problems and again everyone received the breakfasts they ordered.
The wait was no longer then what you would expect with such a large party and unlike the last toast the breakfasts came largely together. With the waitress even providing reassurance and unnecessary apologies to those who had even a slight delay.
As for the breakfast itself I ordered the Baltic breakfast which included bacon, sausage, egg, hash browns, beans and mushrooms. To this I added my new breakfast essential – halloumi. All this was served with lashings of white and brown toast. The quality of the ingredients was superb in particular the homemade hash browns. It was the right size to fill without stuffing and it didn’t hammer the grease either. I was definitely left very satisfied.
It was one of the more expensive toasts but in this instance you most definitely get what you pay for.
As for banter the long table meant it did feel rather like two separate groups but that is always likely to happen with 17 but it a good laugh as ever, particular mention to Texas Free-Ranger Cardiff city experience, and Box of Frogs toilet trouble.
Somehow I feel unable to give a 10 but it’s a definite 9.5/10 for me.”

From the worst to the best in the mere span of a month. From the abysmal depths of the Yacht Club/Marina/Fishtank last moon to the sublime heights of The Baltic Social this month has been a swift climb indeed.
Its like the old fairy liquid adverts with two products tested in near exact circumstances. Two eateries, both booked for a large party, both in the same area ish, both offering Full English’s. Such different levels of quality and service. Starting with the food, excellent smoked bacon and sausages, decent black pud, beans a fair quality, mushrooms plentiful and tasty, halloumi and egg cooked perfectly and could have done with one more of each,toast was thick and buttery and in no shortage at all, the highlight for me though was the hash brown, crispy and light and soft inside made for excellent dippings, I ate it slowly to make it last, if breakfast was a plate of hashbrowns and eggs I’d be very happy indeed.
Complimenting the food was the friendly, professional service from the two bar staff. They never batted an eye as our troop of fit lads (both bearded and unbearded/besuited and beflanneled) moseyed in and took up residence. Drinks orders were promptly taken and delivered with only one or two mix ups, considering the sheer amount of coffees and teas required it was a feat of waiting on skill. The kitchen and waitresses were on top form and all our food came out in a steady stream ensuring all were served in good time with all swaps/additions accounted for. The ease and grace of the team at the social was nothing short of perfection.
Add on the epic tunes that were playing giving Luther Two-Tasche’s exit strategy was just the icing on the cake.
9.75/10 best ever for me.
Take note marina, you sour faced sloppy lazy arrogant excuse of a restaurant.

8 Foot
“I think we can all agree an important lesson was learned today: never dip another man’s egg. Retribution will be swift and complete.
Having not been able to attend Toast for quite some months I was anticipating it to the point where it would be a long fall if expectations were dashed. They were not.
I arrived, in my best three-piece country gent attire, and spied the table of toasters and immediately gravitated to the end at which the dickie bows were on show. Catch ups, stories and coffees flowed and food was ordered; swaps were made.
Having not breakfasted at the Baltic Social before I selected the FE but wished to sample both the meat and the veggie sausages on offer so asked to swap one of the two sausages for the vegetarian counterpart. Not a standard swap out my request was met without a direct problem although the extra halloumi I had ordered in addition was absent, possibly a side effect of my strange twin sausage tasting wish. It took a while to notice this however, as before the plate had fully landed a piece of toast hooked in from my left and burst the yolk of my fried egg. White toast at that. The attack was swiftly reversed with a swoop and scoop of the assailant’s entire egg to great amusement of everyone else. Tables turned. Balance restored.
Once the furore died down I notified the waiting staff of the missing meaty cheese delight and the kitchen quickly grilled up a fresh portion. It arrived on it’s own separate plate in good time to be combined with the black pudding, mushroom and bacon for a truly delectable session of salty mastication. Ah, by the way, unless you’re veggie I’d go firmly with the meat sausages. The veg ones were ok but nothing special whilst the meat variety seemed of good quality, certainly no cheap banger, and very tasty. The great food was swilled down with ample drinks from an efficient and attentive waiting service, and to a sterling soundtrack played at a good volume for all to hear whilst still conversing.
The Baltic Social has all the breakfast basics nailed. They’ve set the scene for a ‘how to’ in successfully feeding a table well into double figure attendees. I will certainly be feasting here again, and recommending it highly. How high? Real high, ‘cause it’s just so fly…
In order to score Toast I’ve developed the SCABS™ system which lists the essential features chronologically in the usual order in which they become discernible within the Toast experience. This month I’m doing it with a boxing theme for little other reason than sporting punditry…
Service – Super-waiting – 9
Coffee – Cruiserweight – 9
Atmosphere – Superfly-weight – 9.5
Breakfast – Heavyweight – 9.5
Social – Super Banter-weight – 10
Baltic Social – Championship Belter – 9.4/10″

Final Thoughts – We have a new Champion! The Baltic Social hits the Top Toast for 2014 so far!