An unusual looking venue nestled into Rose Lane South Side and one that from the outside looks like a coffee and croissant kind of vibe opposed to a tea and toast outfit. We were there to try it out and hoped espresso plus wouldn’t be a T- 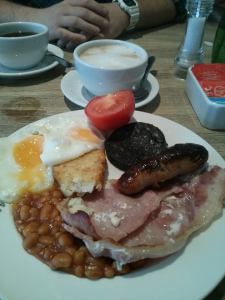 “So sunny so very sunny, almost as sunny as the two eggs sunny side up that came with the brekko. As usual I was first to arrive what with punctuality being punched actually into me from an early age. The other magnificent seven chaps arrived in short order and drinks were swiftly dispatched with a friendly manner from the local waitress. The banter taking a strange turn into OJ Chimpson sex swaps and human-man in a candle served to distract from the slightly long wait for grub. Minus half a point. When food arrived all were served quite quickly and we set to the task. Bacon good,sausage nice but smallish and only one of,minus. 5 eggs good, beans fine tomato raw. 5 off black pud almost raw. 5 off basket of toast excellent but bread was standard loafish material.
All in all decent grub nice venue lovely service. Solid 7.75/10 from me,the extra. 25 off is for the fact it was sunny.”

“Arriving at a very summery Rose Lane shortly before 10.30, accompanied by Toast first-timers, I thought we might have been a bit overeager, that is, until we spied Plotatron 9000, who had arrived at the establishment a few moments before us. Soon a full compliment of 8 hungry, handsomely-bearded gents were supping hot and/or cold beverages, whilst discussing the appropriateness of milkshakes as breakfast accompaniments (a German quirk, apparently). After some clarification from the waitress (no halloumi) and a discussion of the dangers of seemingly tempting American brekkie fare, it was FE’s all round, with a smattering of poached/fried white/brown individualism.
It did take a good long while for the food to arrive, though the bantz flowed freely enough to distract, and when the plates arrived it was in quick succession, with no issues. A couple of rashers of rather salty but fairly tasty bacon, a solitary sausage, again quite nice but two would’ve been preferable. Black pudding was mediocre and cold, tomato essentially raw, 2 fried eggs were nicely cooked and the beans were perfectly satisfactory. I’m always a big fan of hash browns, and this offering was very crisp and positioned cleverly so as not to become soggy or tainted by other flavours on the plate. No mushroom, not a big loss as it’s my least favourite item but an absence nonetheless. Baskets of toast and butter, and both sauces were provided, nothing too special but nicely browned and not burnt; something I’m a stickler about. The pot of tea and glass of OJ I had were, again, decent if not spectacular, but overall a pleasant experience; rather… nice, a word that can often damn with faint praise, so if you’ll bear with me, imagine it being delivered to a cutaway camera Jazz Club style by an overweight man smoking a ciggie.
Nice.
7/10″

“Located just off the rat run of Mather Avenue, Espresso Plus is a lovely little coffee house/restaurant. Clean and bright, with art adorning the walls, it was a great location for some midsummer breakfasting.
The breakfast section of the menu offered a good selection to the morning diner, and despite being tempted by the eggs royale (I’m a sucker for smoked salmon, me) I plumped for the classic full English. A choice of eggs was offered, something not always forthcoming, which is very welcome. I requested fried, and they were spot on, with a good runny yolk. The bacon was solid, good rashers, but not quite as well done as I like. The single sausage was a bit of a disappointment although it was of good quality. Beans, hash brown and black pud were of average quality I’d say. Not bad by any means, but far from the best. The ‘fried’ tomato was disappointing, as it had apparently only been given a lecture on the concept of being cooked before it was lashed onto my plate. The coffee and toast were good, with plenty of butter to apply to the latter.
Overall, it was a solid breakfast at a good price, with good, attentive service. If you’re in the area you could do worse than to drop in for your brek brek.
7/10 – Good, if unspectacular.”

“Espresso Plus was one that had been tweeting us for a while and as the name kind of insinuates, you’d never think of it as a FE kind of place. Luckily we found out it was upon ordering.
Options of eggs on the FE were great and drinks taken upon arrival. Unfortunately, this had to be one of the worst coffees tasted and jealousy of another Toasters milkshake brought all of the boys to the yard.
It took a long while for the food to come, luckily we had some fine mouth words to pass the time AND HOW with human candles and sex change chopper drivers flavour of the day. When they did arrive, they arrived in a flurry and as for the flavour of the food, there were no stand outs, black pudding a bit raw, bacon was alright as were the sausages and the eggs. The hash brown was pretty good though and it just looked like a boggy.
The big minus to Espresso Plus had to be the music, as the plates arrived 90’s pop came blaring on until the minute we left. And not even good 90’s pop that Luther Two-Tache plays, but bad 90’s pop like I play. Being unable to hear much of what was going on shouting was the next course.
Overall a decent breakfast, venue and menu but just the atmosphere that stopped it being a high flyer 6.5/10″

Category : I can't believe it's not better!

← The Vines
Lox and Caper →